My very first semi-official Tri of the season. 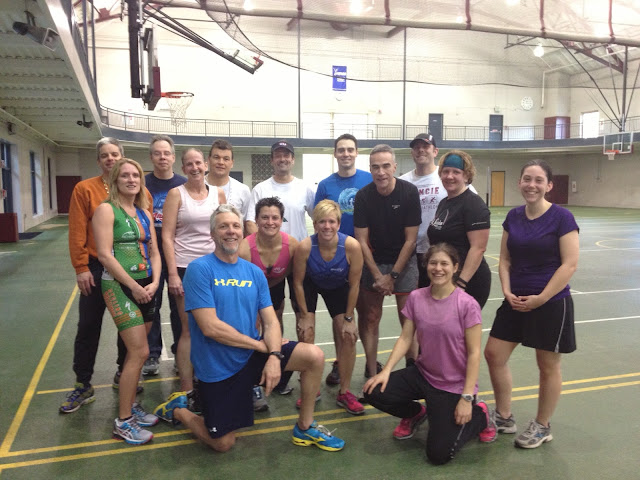 I did the math last night when I couldn't fall asleep and figured I would finish in about 1 hour and 25 minutes depending on transitions, and how crazy slow I run.

Because I run crazy slow.  The kind of slow that you don't like to say out loud.  Because when you say you run slow, the inevitable conversation goes like this:

So my crazy slow is usually around 12:30 per mile.  This is an improvement over last  year when it was about 13:00.  I just started running in January of 2012, so I probably shouldn't complain...but it still is crazy slow, and it's hard to find running partners.

Finished the swim strong.  Was in the transition area at around 12:40 which means I did about 12:00 on the swim.  I led my lane.  I thought the girls behind me would fall back a bit, but they never did.  They were right behind me the whole time, so I didn't get a chance to take a slower lap and recoup.  I would not let them pass me.  They are in their 20's.  I have my pride.  I might suck at running, but I got skillz in the pool.  So I kept up the pace.  They were killing me.

The bike was easy.  Just 30 minutes on the bike.  You could set your own resistance and everything.  I missed Kim. She usually spins next to me (because we share a ceiling fan) and we chat.  But I made it.  Not having to do hills (fake or acutal) helped too.

As I got into the 3rd mile I realized that I still had 14 minutes left to reach my goal of 1:20.  Holy crap. I don't run as fast as I seemed to be running.  Especially not after a swim and bike.  By my 6th lap on the bottom, there were only 3 of us still out there.  Those 2 20 something girls, and myself.  With 3 laps to go I really had to go to the bathroom, but Kim (who already was done at this point) ran along side of me.  I'm not a highly experienced Triathlete, but I think it's safe to say peeing down your leg while indoors and running with your "fan buddy" is probably frowned upon.  With 2 laps to go, Mangie (1 person, 2 separate bodies) joined us too.  With 1 lap to go I realized that my 1:20 goal was out of the water.  Could I break 1:18.

My brain is still fuzzy.  Even after breakfast with all the "cool kids."

I finished my 5K under 34 minutes.  NEVER have done that before. Not on a training run. Not in a race.  NEVER!!!

It's really freaking awesome when you surprise the crap out of yourself!!  It's so awesome that when you realize your massage therapist is right behind you at a stop light, you jump out of your van and run back to tell her.  (I'm obnoxious that way...it's how I roll)