I want to be an AFTER picture...NOW!!

I haven't written in a while because I've been really busy, slightly lazy and more than a little emotional about the whole TRI thing.

Back in May, I did my first TRI of the season.  It was also the first time I used a wet suit.  It was a cold, wet, miserable morning but I did it.  I jumped in a frigid lake, rode my brand new bike, and hobbled through the run.  I was relieved to be done, and chilled to the bone.  I found out the next day that I actually won my age group, and was pretty excited.

A few days later, a link to race pictures was posted.  It all went down hill from there.  After searching through hundreds of pictures, this is what I found. 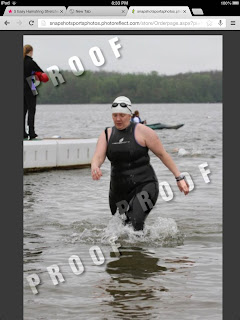 I was horrified.  Devastated.  Embarrassed.

I knew wearing a wet suit was going to be bad, but seeing the actual photographic evidence sent me over the edge.  And not just for the obvious reasons like the fat rolls and the hanging bra strap

To review, in case you didn't know...I did my very first triathlon on July 1, 2012.  Basically a year ago.  Since then I have completed 4 outdoor sprint TRIs, and indoor sprint, a half marathon and about 6 5Ks.

That translates into a LOT of working out.  I spin, I run, I swim (not enough).  Typically I train 5-6 days a week.

Last summer before I moved to Richmond, a group of my friends threw me a going away party.  As usual whenever there is a group of women the topic usually turns to weight loss (especially because the counter was laid with several pinterest inspired, bacon infused desserts).  I think there was trash talk about who was going to the next half-marathon and who would be the fastest.   I was whining (again) about my lack of weigh loss and joked with the girl next to me that I should get some sort of handicap on my time due to the extra 50 lbs I had on her.  She looked at me and said "Just lose it."

All I could think of at the time is WHAT THE HELL DO YOU THINK I'VE BEEN TRYING TO DO??

Now it's a year later and I still haven't lost anything and her words are still hanging over my head and I still hear crickets...

I want to be an AFTER picture!!

I am willing to work hard.  I do watch what I eat.  I have never been a great athlete, and will never be a fast runner, but I'm out there.

And my goal right now is to keep TRI-ing.  Especially if it means that by this time next year...