Happy Anniversary to Me

A year ago this morning, I woke up early and terrified.

I packed up my stuff, ate a bagel and left my house to go do my first ever triathlon.

Did I mention I was terrified?

The air temperature was 96 degrees before the race even started.  They moved it up an hour earlier because of the excessive heat.  The water in the lake was 84 degrees.  It was like getting in an algae filled bathtub.  Nasty.

Went through my first ever transition with no problems.  Got passed by the remaining 2/3 of the field before I reached the 1/2 way point.

The run sucked.   By this time it was around 98 or 99 with the humidity that only a rural Illinois cornfield can bring.  I ran the first mile.  Walked for about 1/2 of the 2nd mile.  Had goosebumps all over my arms and legs for the 3rd.  I was pretty sure that goosebumps while running in oppressive heat wasn't a good sign.

I crossed the finish line before the 2 hour mark.  DFL.  Dead F***ing Last.

But I did it.  I crossed the finish line.

I had a crazy idea, I trained, I followed through.

It probably the personal achievement that I am most proud of.  Not probably.  It is.

I posted the anniversary on my blog's facebook page this morning, along with the picture of me when I crossed the finish line.

A few hours later while scrolling through my news feed I saw this (excuse the typo): 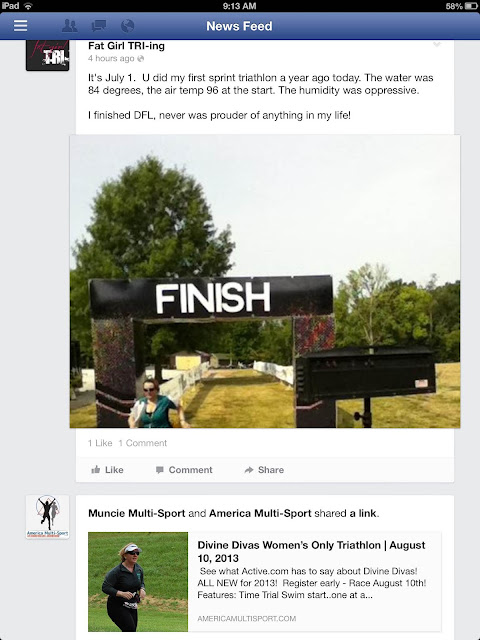 See that chick pictured in the ad RIGHT UNDER my post?  That's me.

Americamultisport.com put a picture of ME on their website.  They are the race organizers of the 2 races I've already done this year, and several that are coming up, including a women's only TRI in August.

At first I was horrified.  But quite honestly, how better to celebrate a life changing anniversary than this?.

I may be heavier than I like.  I may never look like my "idols" here in Richmond.  But I have accomplished more in the last year than I ever imagined.

Labels: Cycling I got this! running swimming