So this morning means that there are only 99 days left.

But I've been told I got this.  I am going to choose to believe those fools that keep telling me that.

This weekend I went running by myself in the snow again.  And when I say "by myself," I of course mean at least 1/4 mile behind the Running Group, as is my standard place.  I'm used to it.  I'm not bitter or sad.  And this weekend I actually had company. 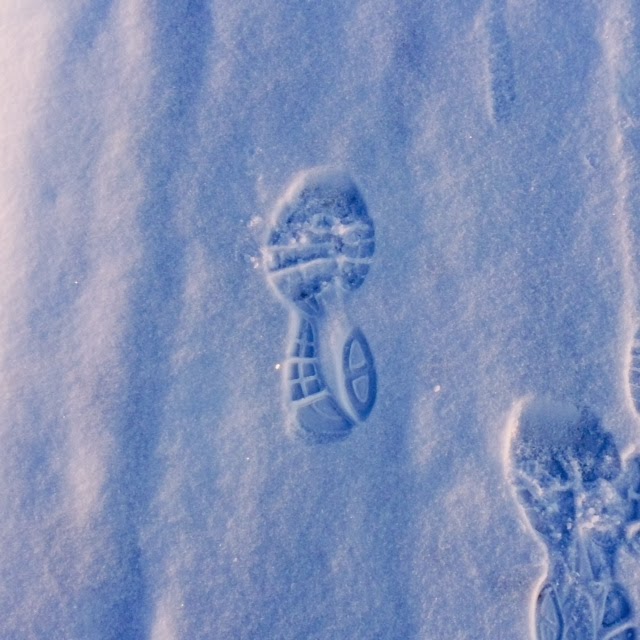 I'm not quite sure who this shoe print belongs to, but it was my friend and kept me company for the first 2 1/2 miles of my run.  I am guessing it was a person whose fear of shiny snow matches my own, as they kept to the far left of the road in the slightly crunchy, not yet snow packed shoulder.  I also believe that this was probably a guy or a very tall woman, because the one time I tried to match the stride, I almost broke into the splits.  There was a brief section around 1 1/2 miles where someone's waffle-y patterned shoe covered over the the prints, but I could still make them out.  So it meant that my shoe print friend was probably in the front part of the pack.

When I took walk breaks, the shoe print told me to get moving again. Which I did, because it was a very authoritative shoe print.

When I stopped in awe to take this picture of the sunrise over a snow covered field, my shoe print friend did not judge, but stood there while I attempted to get my phone back into my Spi-Belt. 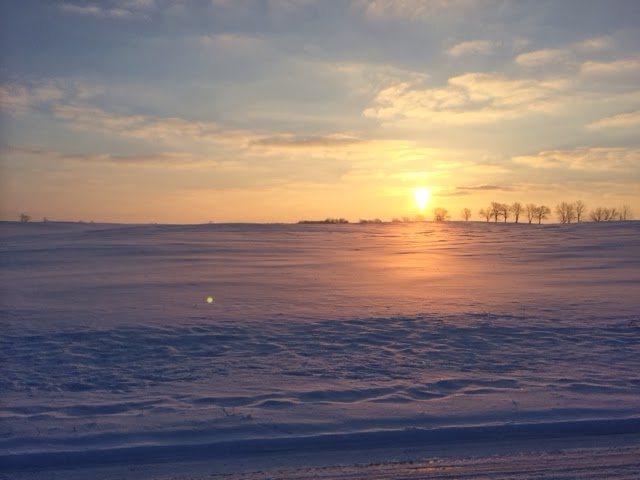 When I had reached the 2 mile mark, where I had originally planned to turn around, my shoe print friend said "Come on girl...you can do 5!"  So I did.

When I got to 2 1/2 miles, I reluctantly waved goodbye to my shoe print friend and turned around for the run back.  Sadly, a snow plow had come along so the road no longer had that runner-friendly, slightly-crunchy, not-yet-snow-packed shoulder, so the fear of falling returned.  But I persevered.  I kept going.  And since the road was in an area with a number of Amish families, I marvelled at horse-shoe prints in the snow and dodged...well...the stuff that you need to dodge when there are a number of Amish families living along the road.

It was a good run.  Nowhere near the 13.1 I will need to put in 99 days from now.  But it was filled with new imaginary friends, a beautiful sunrise and most of all...joy.

Labels: I got this! Random Thoughts running