I clicked on the link, clicked on my age group, and when the document popped up, I went straight to the end, and started scrolling upwards. 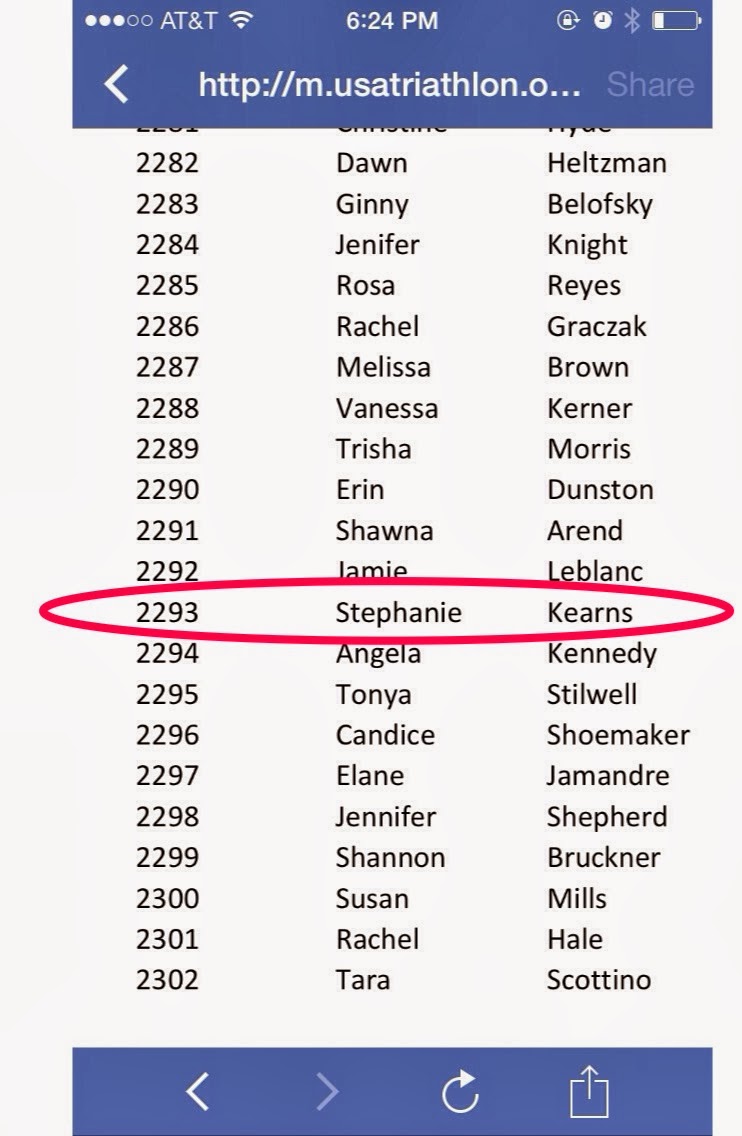 It got me to thinking...

My first voice, the one with a positive attitude, is highly competitive.  She was thrilled to do the math and realize that there were 122 people ranked lower than her.  That first inner-me quickly clicked over on the 45-49 age group and realized with the number of points I earned last year, I would have been in the 1800s.  So cool.  Maybe if I really work hard this year, my performance will improve and I'll even get up into the 1500s!  What about the 1000s??  Awesome!  I got this.

The other inner voice, the one that would rather binge on 13 episodes of House of Cards and eat Oreos all day, decided to speak up.  She pointed out that I haven't been doing the work lately.  That no matter how much I train, I still am a horrible runner.  That I've never done more than 42 miles on the bike and it is less than 3 months to the race.  She reminded me that the other triathletes that I know will all be sitting around for hours to wait for me to finish...IF they wait for me.  I will be last among them.

Both inner voices are idiots.

The first one is an idiot because she has forgotten that at her first triathlon, she finished DFL, and it was one of the proudest moments of her life.  What was important was not the time it took to finish, but that she had a crazy idea...to do her first triathlon at 42...and she followed through.  She didn't care that she was last.  She didn't care that every single person passed her on the bike (although she was quite pleased that she was one of the first people out of the water).  She finished.  How dare that inner idiot gloat that she wasn't last anymore?

The second inner voice is an idiot because she is lazy and pessimistic.  She sets limits on herself, and how hard she is willing to work.  She thinks that no matter how much she kids herself, the REAL triathletes she trains with merely tolerate her presence.  And she's not really training WITH actual IronMan finishers.  She's more like IronMan-adjacent.

See??  Idiots the both of them.

Also, the group of people that I have met since I became insane took up this sport have been nothing but awesome.   It doesn't matter if they are "just" runners from the group, volunteers at races, actual real life Iron Men (or Iron Women) or the guy at the bike shop.   They are awesome all around. They encourage one another.  They push each other to go farther. They are each other's biggest cheerleaders.  Those that did ToughMan last year stayed until the last Richmond person crossed the finish line.

They have been quick to recognize my pessimism as fear, and replace it with confidence.  They are inspiring. They are incredibly bad influences, but in a good way.  When I state I'm worried about the run, they say "Just walk!"  They won't accept my excuses, and have welcomed me back from my bouts of laziness with open arms.  And now they MUST stay until I finish, because I have sung their praises.

I am writing this blog to hold myself accountable to actually finish what I've started.  But I'm also hoping that somewhere along the line, there may be a woman that gets inspired to do something Abso-Freekin-Crazy, like her first 5K, or learn to swim, or dust off her bike to do her first ever Sprint Tri.  Because seriously...HAND TO GOD...if this overweight, middle aged, TV addict can be part of the .00023%...then so can she.

*page 4 of the Age and Sex Composition document from the 2010 US Census.
Labels: goals I got this! Rough Patch