We interrupt this training...

I haven't written in a while, and for no good reason.  I have plenty of posts worked out in my head, but I just haven't gotten them down on "paper" yet.  Call it laziness, call it a lack of self confidence, call it an addiction to streaming video...I just haven't been in the mood.

This weekend, I went to a memorial service for my Uncle Chuck, my Dad's brother.  He passed away at the beginning of August, less than a year after his wife, my Aunt Sandy.  Needless to say, it's been a tough year my cousins.  We also lost my Aunt Cathie, one of my Dad's sisters.  It had been years since I saw my cousins, but now I had seen them twice in less than a year,  I realized that I'm now at an age where many of my family reunions will be entwined with tears and picture collages of lost loved ones.

So this is what it means to be grown up I guess.

I'm writing about this for 3 reasons.

1) People liked what I have written.

Remember that lack of self confidence I mentioned earlier?  Well it is ever present.  Will people think what I write is funny?  Will they be inspired?  Will  they "get me"?  Will I offend someone?  Does anyone even care?  These are questions that have stopped me in my tracks hundreds of times in the past.  I'm sure they will stop me hundreds of times in the future.

This weekend, I was amazed at how many people mentioned my blog and asked why I wasn't writing more.  So in the midst of grief, people find humor in the perils of Kale.  Believe me...there is more where that came from.   Humor...not kale.  I learned my lesson.

2)  My genes are not condusive to looking like the classic triathlete.

Dear Grandma,  I have your ass and thighs.  I'd like to give them back.  Love, Steph

There are some things that no amount of cardio, strength training or diet will change.  They are called genes.  Some genes will produce a tall slender person who can eat anything and will contemplate writing a diet and lifestyle book about it.  Some genes will produce a short squatty person with substantial thighs and a hefty backside, who can gain 7 lbs just by eating slice of bread and copes by writing self-deprecating remarks on a blog.  This weekend I saw both ends of this gene spectrum within my extended family, and all sorts of genes in between.

Genes are genes and there is not much you can do about it...just make yourself the best you can be with the genes you were dealt.  Unless of course you can afford lipo or a boob job.  Then totally get the lipo.

I didn't become an Aunt until 4 years ago in spite of the fact that it was my New Year's resolution several years running.  Now I am blessed with 3 nieces.  Yes, I wanted to be an Aunt, but even more so, I wanted my kids to have cousins.  I can remember in vivid detail running around non stop with my cousins when I was a kid.  It felt like we saw them all the time, when in reality it was probably only every few months.  They were such a huge part of my childhood, one of the highlights.  My kids never got that.  My younger kids have started to run around with the oldest of my nieces, but it's not the same.

I brought my two youngest with me to the service on Saturday.  Because we moved out of the area, they hadn't met most of my extended family, so on the 4 hour drive I explained who everyone was, how many brothers and sisters their Grandpa had, and all sorts of family history that I had never shared with them before.  I coached Peter in how to respond to the inevitable comments on his red hair, and explained to both of them what a Memorial Service was like and how they should behave.

During the service and at the first part of the luncheon they stayed close by, a little shy and a little overwhelmed by all these strangers I was calling family.  But then it happened...the kids...they found each other.

For the next 4 hours my kids ran around non stop with my cousins' kids as if they had known one another forever.  As if that is the way it had always been.  They eventually ended up at the bar sharing a round of Kiddie Cocktails. 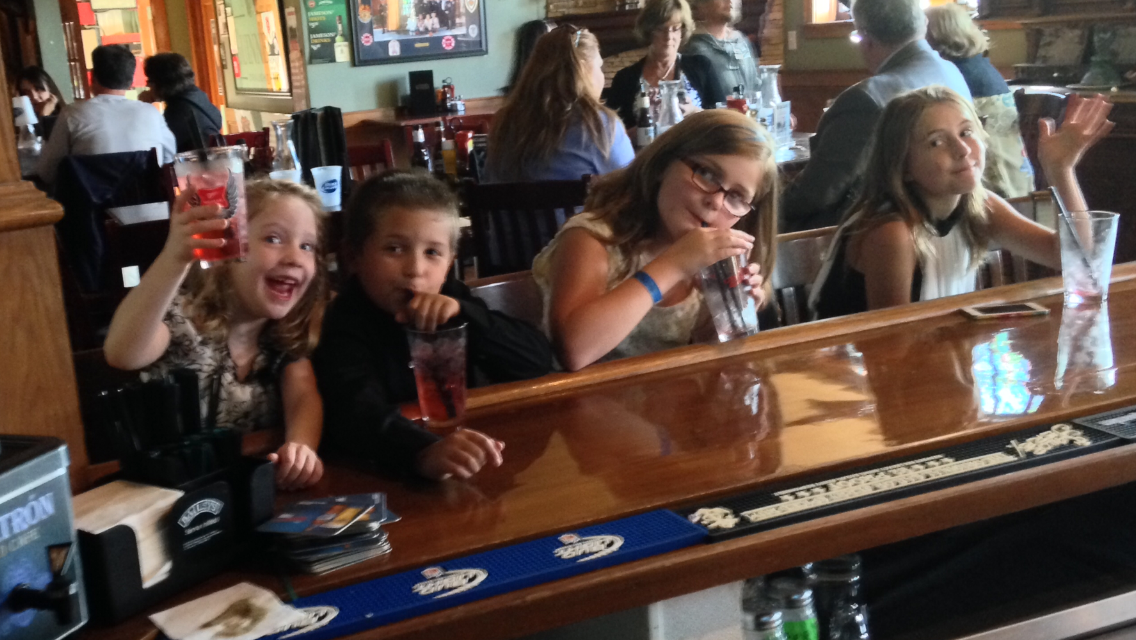