The Good, The Bad, and The What Have I Done?

October has been an interesting month so far...

Last weekend My husband and I headed to Muncie, IN to take part in the Muncie Mini-Marathon, 10K and 5K.  We both did the 10K.  He smoked me...because he's only been running for 4 1/2 months...so why wouldn't he kick my butt?  Not that I'm bitter or anything.  He came in 2nd in his age group and a personal record.  I was pretty proud.  But I didn't get to see him finish on account of the fact that he left me in his dust.

I actually had a great race, although because it was October and not overly hot, I passed on the water stations which was a big mistake in the end.  The first 4 miles were the fastest I've ever run.  And by run, I mean do run/walk intervals.  (Run 3 minutes/Walk 1 minute).  The 5th and 6th miles weren't as fun.  In the end, I got a PR and I won my age group!  And for a change....THERE WERE OTHER PEOPLE IN THE AGE GROUP!!!

It's been fun doing my run training with my husband.  There were several times in the last month or so that I just did NOT want to put on my running shoes.  But he has been so faithful to running, and has improved so much, and it's nice to have something to do together...so I've put the shoes on and gone out with him.  As is typical, I watch him get smaller in the distance as he leaves me behind, but I know that we are both out there together in spite of the distance.  I've enjoyed it so much that I didn't even give him the finger when he was telling me how I needed to correct my breathing pattern.  Oops...have I said too much?? 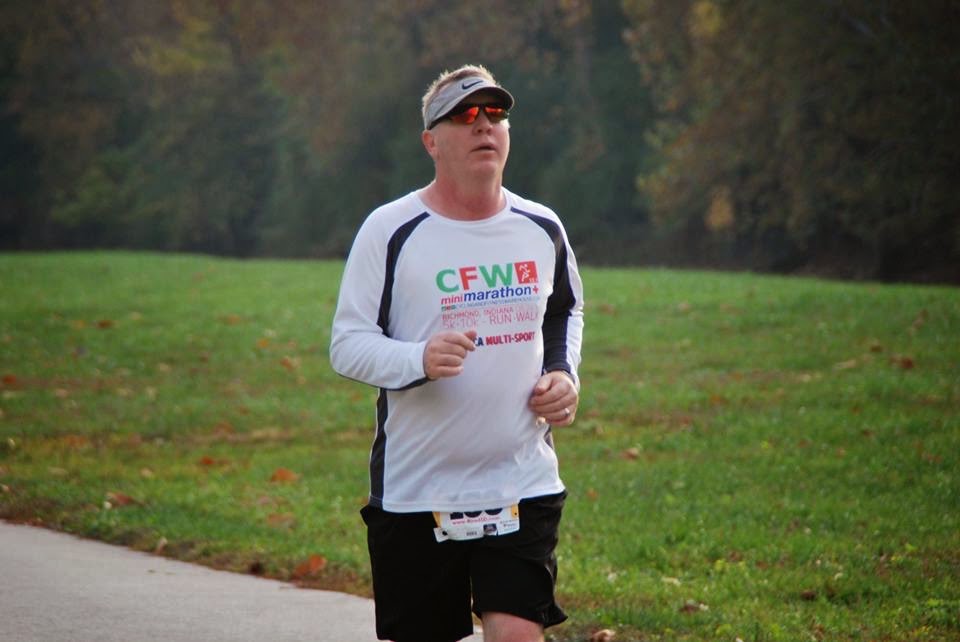 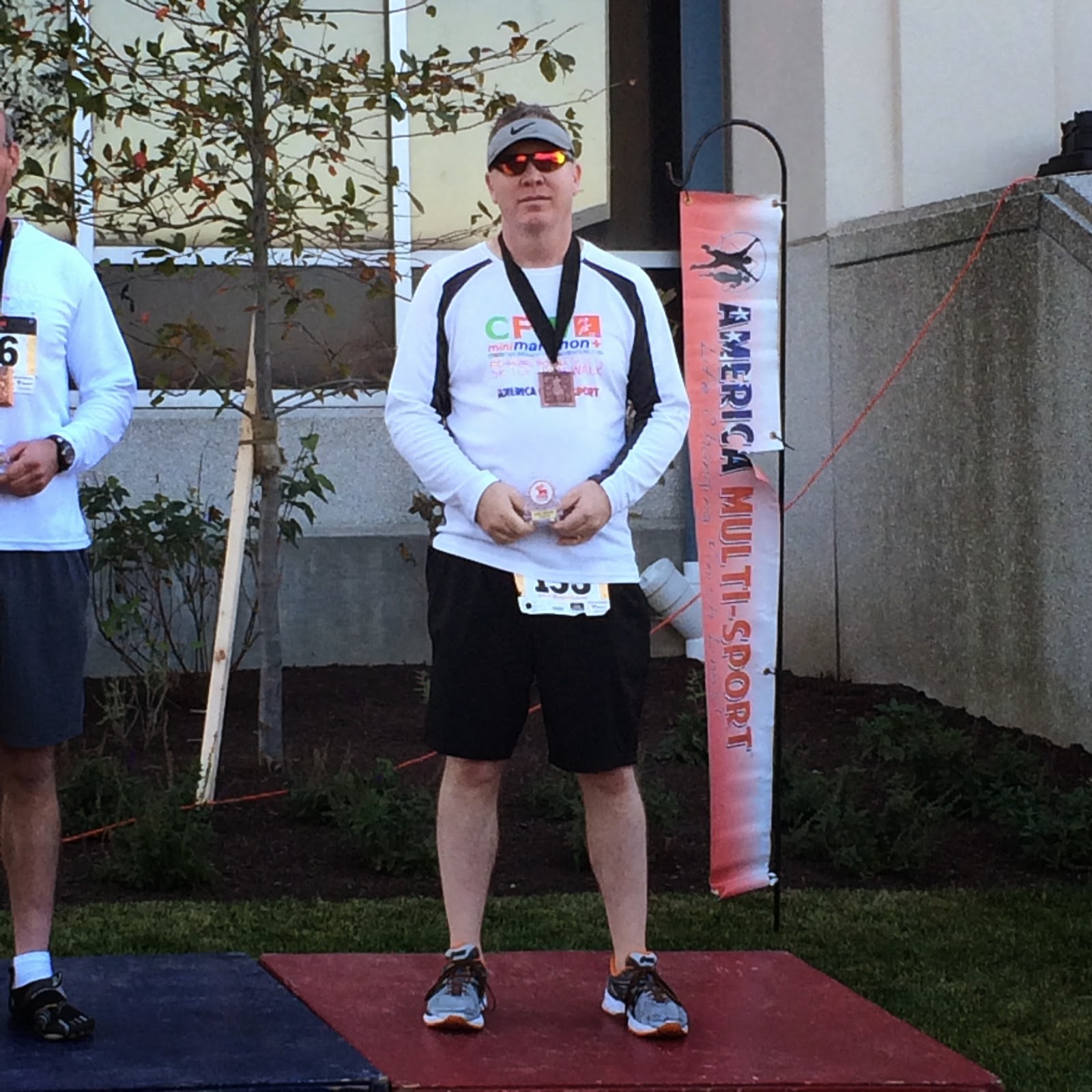 The first Saturday of October was the Prairie Creek Reservoir Tri in Muncie.  After a great race and PR in September, I had been working pretty hard to make sure I had another PR for the October race on the same Sprint course.  Well, mother nature had her own opinion on that matter...BITCH!

It was cold (40s) and it was windy (35 mph gusts) and it was miserable and I got my first ever DNF.  Bikes were swinging and banging into each other in transition.  They had cancelled the canoe race that was supposed to happen at the same time because it wasn't safe.  I waited at the start in my wetsuit with my frozen toes all set to be hard core and awesome and have a story to tell at the finish.

The swim started and I got about 50 meters out where the swells kept hitting me in the face.  One after the other.  This was not something I had ever trained for.  This was not something I ever even thought about.  I've swam in choppy water before, but nothing like this.  And this was probably pretty low on the "Crappy Weather for Open Water Swimming" Scale.  I just didn't know what to do.

I grabbed onto a kayak for a quick breather...something that I had never done before...then tried again.  Nope.  I kept my eye on that first buoy and no matter how hard I tried, I couldn't seem to make any forward motion towards it.  I looked for the kayak again.  It was pretty far to my right at this point and had 6 people hanging on it.  I looked to my left towards another kayak.  It was covered with swimmers too, and even farther away.  I looked ahead passed the buoy and there was one of the boats with a line of swimmers between us.

That was the moment I panicked.

Since I was a kid, my Mom said I was part fish.  I've always been comfortable in the water.  I've never been scared or had any anxiety at all, until that moment.  I just knew that if those swells kept hitting me and if I started to go under...no one would be able to get to me.  In that moment I said to myself that THIS race wasn't worth it.  I had family in town from 4 different states, and didn't need to prove anything...so I turned around and tried swimming back to shore.  You would think with the wind at my back it would have been easy, but it wasn't.  I even lost my timing chip in the water!

I read a blog post from another athlete that completed the race.  The wind gusts versus the bike segment were just as awful as the swim.  She was miserable and ended up in tears in transition, but she finished.  Part of me wishes that I would have toughed it out...but in the end what would it have proved?  Plenty of athletes far more experienced than myself walked away from the race and didn't even start.  The race director even told me he wouldn't have attempted it.

Since I did spend 10 minutes in the water, I feel that I get to wear the race shirt...so that's a plus.


The What Have I Done?

Ever since I finished ToughMan, I had a little voice in the back of my head whispering "Do it!"  That voice has been with me every day, and it has gotten louder and louder to the point that it is now screaming at me: "DO IT!!! DO IT!!! DO IT!!"

I realized sometime in those euphoric days after ToughMan that I always knew what my dream was, but never admitted it to myself.   I knew what my dream was every time I watched a live stream of IronMan finish lines and saw people I know finishing their races with their hands in the air and joy on their faces...or in the case of of my favorites...doing a cartwheel.  After ToughMan I was halfway there...halfway to a dream that was sooooo far out of my comfort zone that I couldn't even acknowledge it to myself.

I wanted it to be me.  I wanted to cross that finish line and hear those words:  "Stephanie Kearns...YOU.  ARE.  AN.  IRONMAN!"

So after some tense contract negotiations with my husband, he finally caved gave me his blessing, Next year, I'm registered for IronMan Florida on November 7, 2015.

I'm assuming it's some sort of mid-life crisis.  Not sure yet.  I'll let you know over the next year.

But at least now I have a running partner!

PS...I'm also going to be fund raising for the IronMan Foundation...but that's a story for another day.  There's a link on the right side of my blog page if you want details.

Labels: Cycling goals I got this! running swimming