I just came off a 4 week stretch of races every Saturday.  It was a very stupid thing to do.  I had great races, but I'm so wiped out right now.

This race was a last minute add on.  It was a super sprint, so it was really short, and since it was run by America Multi-Sport, I got to race for free.   I am the Community Coordinator for AMS here in Richmond, and so often I'll show up early and help with Registration or some other set up task and then participate in events.  It's a great perk, but I'm finding out the lure of free registrations doesn't mix well with a training plan.

I had a good race. I screwed up my watch (Garmin 910XT) so I didn't have all the data I wanted when I was done, but apparently I got a PR on my 5K.  Some Wayne County Tri/Richmond peeps were there too.  Tiffany placed 2nd overall, and Kim won her age group. 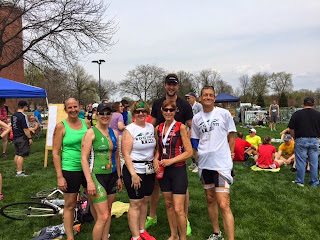 This is one of the 2 events I had originally planned for this month.  The times don't look all that impressive, but it was 5:04 faster than in 2014 AND it was raining and cold.  The rain started towards the end of my first loop of the bike route and had stopped for the most part by the time I ran, but it was still cold and windy.  One of those races where you as yourself WTF am I doing???  In T2, I had to pour water out of my bike shoes.


This was a small race on familiar roads, so it shouldn't have been a big deal except for the fact that there are 2 demon hills on the bike route, and I had only made it up the worst of the hills once in practice this year, and that was on a dry day.  I did make it up the hill both times thanks to determination, witnesses and the little chain ring (which I had completely forgotten about on the previous attempts).  There were about 20 participants in 2 waves.  In 2014, about 4 people from the second wave passed me, and they had started about an hour later.  This year, not a one, although there were threats.

Keith, one of the guys in the race, yelled "I'm coming for you Kearns!!" as I was midway through the run.  I knew he meant it too.  I had one of those epiphanies where I realized I didn't have to "save" anything for the run and if he passed me and I still had the ability to walk and/or breathe...then I didn't work hard enough.  So I busted ass...as only a 11:30 avg pace back-of-the-packer can.  Ended up finishing the last 2 miles under 11 minutes each...and PR'd my 10K.  I waited around for him to finish and gave him a big hug.

AND...I could still walk and breath.  I guess I could have gone faster.

Another free registration at the last minute. My training plan had a 12 mile run, so I figured WTH? and took the bib.  Jan is a new friend who is testing out the Triathlon waters.  She went with me and we had a really fun morning.  I had been warned that the course was crowded, and it was.  As a person who does run/walk intervals, I am always careful about looking behind me before I stop to walk.  Also I try to stay to the side, out of the way of runners.  There were 25,000+ people racing.  I'm making a rough estimate that 40% of the people needed walk breaks...so about 10,000 run/walkers.  Of those 10,000 I would guess that there were maybe 3 people that were also looking around to make sure they didn't dramatically stop right in front of me.

The highlight of the race was being able to meet up with Chrisy, one of my friends from Illinois, and also one of the pair of friends that started this whole "road to Ironman" crap.  They convinced us to walk a 1/2 Marathon in 2011.  The next year, I did the run/walk thing at the same race.  Anyway...Chrisy does the Indy Mini every year, so I got to see her at the Expo and then again race morning.


And I can't forget to show pics of Jan and of my quick stop on the yard of Bricks at Indianapolis Motor Speedway.  (My inner NASCAR nerd required it...go 48!)

This was supposed to be an Olympic Distance race, and it was the very FIRST thing I wrote on my calendar for 2015.  Yet after 3 races on 3 consecutive Saturdays, I didn't have it in me anymore.  I was given lots of advice by experienced Ironmen, and was told if I stuck with the Oly, to not race it but just use it for training.  I didn't figure I would be very fast anyway, so the thought of going even slower did not appeal to me...so I dropped down to the Sprint, and proceeded to beat myself up over it for the entire week leading up to the race.

It was one of the best decisions I made, because I found out how much my training has paid off.  I knew I was doing good, but I had it in my head that my previous best time on this course was 1:35:00ish.  I wanted to try for under 1:30:00 but it was really hot out by the time I ran, and my legs were not likeing the hills, so I just kept pushing to do my best and be as far under 1:35 as I could get.

I am confident that one of the reasons I was doing so well was that I was wearing my new Team IMF kit that I just got in the mail last week.  (One of the perks of begging everyone I know for fundraising help).


Anyway, I finished the race with an official time of 1:32:28.  Since the rest of my group was racing the Olympic, I had time to kill before I had to watch for them to come in off the bike, so I looked up last year's results of the same race:  1:48:23.  ONE hour, FORTY-EIGHT minutes and TWENTY-THREE seconds.  I took 15:55 off of the same race on the same course exactly 1 year ago.

So, after beating myself up for a week on "wimping out" of the Olympic race, I instead crushed my previous race time.  I'm not beating myself up anymore.  I knew I would have done poorly on the Oly because I had over done it in the last few weeks.  But taking that much time off in a year showed me that my hard work is paying off.

I'm better, faster and stronger than I was.  <insert some sort of victory chant, fists raised in the air, super hero pose here>

It was a fun month but a very tough month.  I won't do that many consecutive races again because it completely disrupted my training schedule.  Racing is a blast.  It's fun to hang out with people that you don't know well, and get to know them better (Jan).  It's fun to see people from your past (Chrisy).  It's great to race with a training partner and see all those O'Dark Thirty runs pay off (Kim).  It is amazing when you realize basic threats and heckling will improve your performance (Keith).  But even when you don't kill yourself in a race, they take up time, energy and lots of brain power.  Not to mention all the time posting pics and comments to facebook...geesh...


On November 7th I'm racing in Ironman Florida 2015 on behalf of the Ironman Foundation.  Any donation big or small is appreciated!  Check out the "Donate" page above, or click on this link to contribute!  THANK YOU !

Labels: Cycling goals I got this! Race Day running swimming