When I was in high school, I watched a TV movie that you made.  It was called Challenge of A Lifetime, and was a story about a really old divorced lady with a teenage son that decided to do Ironman.  She hadn't run in years.  She was in a bad place in her life.  She decided to do something overwhelmingly insane. I'm not quite sure why, but this movie stuck with me over the years.  I couldn't imagine anyone working that hard to do a race that grueling, especially a Mom with a teenage son.  Yet she did it anyway...swim 2.4 miles, bike 112 miles and run 26.2.

Fast forward to April 2012.  I'm 42 years old and swimming at the campus pool at the college my husband works at.  In the middle of a stroke, I suddenly think of your movie.  I remember the moment vividly.  Swimming my lap, turning to breathe, looking out the screen door and seeing the dandelions in the grass.  I made a mental note to google "TRIATHALON" when I got home.

Some things I immediately learned:
Shamefully, I also made this realization:
The previous summer, some really annoying friends talked a group of us into walking a half-marathon.  At the time I thought it was the stupidest of stupid ideas, but we did it.  I started the process sedentary, depressed, and disinterested, but though the camaraderie of our group, I got active, got motivated and lost some weight. At the race, I even started "jogging" a bit.  If you could call it jogging.  I decided that I would try to start running, but I couldn't go more than 1/4 mile without stopping to walk.  In spite of this, I signed up for a marathon relay with 3 other girls.  I immediately claimed the shortest leg (6.5 miles) and did my best to try and finish.

By the time I googled "triathlon" I could run/walk at a turtle's pace about 4.5 miles, so the distances of a sprint triathlon seemed do-able.  The swim wasn't a problem.  I had a bike somewhere, I was pretty sure, and I could finish a 5K.  I hoped.  My friend Crystal decided she would do it with me so we started training and on July 1, 2012 I crossed the finish line of my first ever triathlon.  I was dead last.  I was immensely proud.

The week after I finished my first race I moved to a new town, and within a few months I had found a community of triathletes.  They were so encouraging and so cool and I was in awe.  Many of them had already completed Ironman races or were training for races in 2013.  I tracked them online at IM Louisville and watched the live stream of many of them crossing the finish line at IM Madison and had tears running down my face.  To take on that challenge seemed so far out of my grasp.  Yet I realized I swam in the same pool with them, ran in the same group as them, rode with them.  It was far far far behind them...but still.  If they could do it...could I?

Which leads me to the purpose of this letter.  I am 100% positive that without having watched your movie as a girl, I never would have taken any interest in triathlon.  I may have transitioned to a healthier lifestyle, and become more active...but I never NEVER would have googled "TRIATHALON".  And because of that, and also because it was 30 years ago this year that the movie aired, I was hoping to ask a favor.

I was hoping that on November 7, 2015 you might consider coming to Panama City Beach, Florida.  And if you weren't busy somewhere between 10:00pm and midnight, I hoped you might wait around the finish line at Ironman Florida, and put my finisher medal around my neck?  I have so many friends and family that have been encouraging me and supporting me over the course of the training, but it was you and your movie that planted a seed 30 years ago.  And now I, a "really old lady" with 2 teenage sons (and 2 younger ones too!) have decided to do something overwhelmingly insane.

No pressure, I know you're busy.  But even if you can't make it, I know Nora will be there with me in spirit! 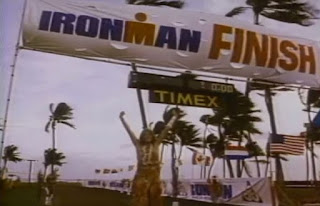