How I Failed as a Women For Tri Ambassador

Please forgive the varying back ground colors and the weird placement of pictures.  Blogger is being stupid today.

I became a women for Tri ambassador in 2015 and was thrilled. I was so excited to promote the sport of triathlon among women in my community.  I was a member of Team IMF raising funds for the Ironman Foundation and my whole life revolved around my upcoming first full long course race IM Florida. I was a living, breathing promoter of all things triathlon, all things Women For Tri, and all things Ironman. 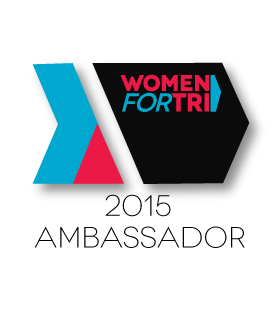 In 2015, I raised over $4,000 for the Ironman Foundation.  I worked harder on anything I ever had in my entire life to train for Ironman Florida, and actually completed the race in spite of myself.  I bought "You Can Tri With US" tank tops as gifts.  I acquired an entire wardrobe of triathlon, USAT, Ironman and Ironman Foundation clothes as well as a huge collection of hats, water bottles and other gear.  I got a tattoo, but that is a story for a different post.  What I am trying to say is that in 2015 I acted like a sponsor for triathlon and Ironman and Women for Tri.  I gave it money.  I gave it time.  I gave it energy.  What I did not give back was a woman.

In 2015, I did not directly influence a single woman in my community to take up the sport of triathlon. In fact, I did the opposite.

I am ashamed to admit that as of all that time, energy and money I failed Women For Tri.  And worse, I directly influenced not one, but 2 middle aged white men to become triathletes, a demographic that is so under-represented in our sport.

Tom did a Sprint Tri here in our town along side a bunch of our friends.  It was a great day.  I wanted to be there to cheer him on at the finish line so I acted as sherpa for Tom and a volunteer at the race site.  He had a great swim and a fast bike and a fast run and completely crushed any kind of PR I ever had.  He even placed in his age group!  (And, he looks pretty good in lycra...just sayin) 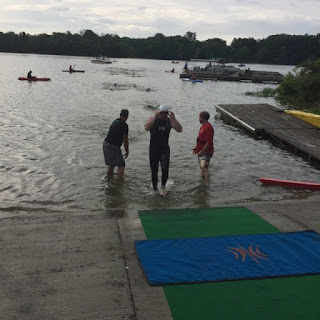 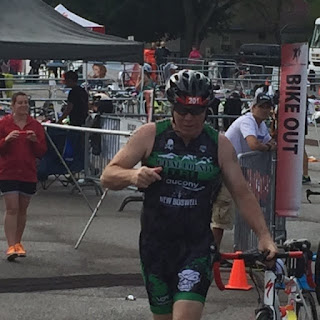 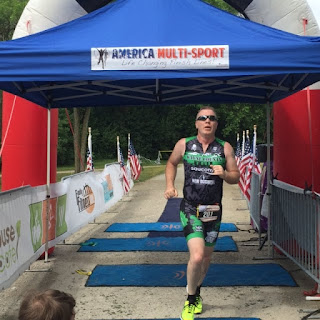 A week later, my brother John did HIS first Sprint Tri somewhere in Minnesota.  He also had a great day, but since he's always been a great runner, and still holds a school record at our High School from 1998, he wasn't satisfied.  (Those annoying high achievers!!!) 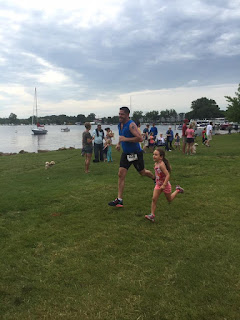 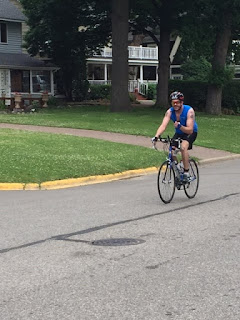 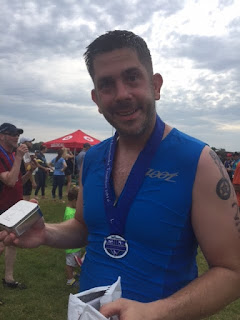 As a finishing present, I sent him his very own Road ID with the following inspirational quote:

So Women For Tri, I apologize.  I did not come through as an ambassador for you.  I did not bring more women into the sport.  I have failed.

On a personal level though...I have gained much.

I gained a training partner in my husband, even though as a newbie he still leaves me in the dust in all 3 disciplines.

Also, I have had more contact with my youngest brother in the last 6 months than in the previous few years...and once in a while he actually takes my advice!  So I have gained a friendship with a guy I have known since he was only minutes old!

Take another look at that pic of my brother running in to the finish line.  That little girl who is airborne with her Daddy is my niece Kylie.  Maybe...just maybe...the seed of triathlon was planted in her that day.

Both Tom and John have each completed another Sprint.  As I type, John is in the midst of a Ragnar Relay up there in Minnesota.  Tom is out doing his long run.  They both have mentioned the possibility of 140.6 in their futures.

Middle Aged White Guys...look out.  My guys are coming for you!